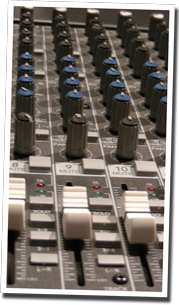 I've been engineering recordings since 1984. That means I've seen a lot of changes in the way music is produced.

I got my start in the 80's in Los Angeles, hand picked and trained by a veteran of the recording industry. I had the privilege of engineering or playing in some of the great studios around LA, including United Western, Capitol Studios, and Martin Sound. What a great experience to be around one of the first Mitsubishi X-850s in Hollywood, or to have Joe Martinson take you into a back room to "show you something really cool"...what was ultimately going to become Neve's Flying Faders automation system.

Leaving LA for family reasons, I worked in many project studios in Alberta, Canada and in time built my first studio with my name on it. Within a few years, tape reels were retired and hard drives became the thing. As a result, giant consoles and slicing tape with razor blades are a fond (mostly) memory. The stuff we can do today with a mouse and a reasonably fast computer was the stuff I could only dream about back in Los Angeles.

Today, I run a small but well equipped studio suitable for all manner of electronic production. Most of what I produce is "in the box". There are plenty of opinions out there regarding if that is the way to go or not, but for me it opens up doors that 30 years ago were the stuff of science fiction. The great thing is that all those cool plug-in interfaces came from real devices, many of which I've been lucky enough to touch.

Over the years, I have recorded everything from full orchestras, to solo piano. Classical, pop, jazz, rock, rap, new age, country, gospel... What I've learned is that a good performance is a good performance. Good gear and a good ear help, but gear doesn't make a song.